These are the most used and generally accepted scales.

The major scale is one of the most commonly used musical scales, especially in Western music. It is one of the diatonic scales. Like many musical scales it is made up of seven notes: the eighth duplicates the first at double its frequency so that it is called a higher octave of the same note (from Latin "octavus", the eighth).

The characteristics that give the major scale its specific flavor are found in the sequence (or pattern) of whole steps (WS) and half steps (HS) that form the scale. 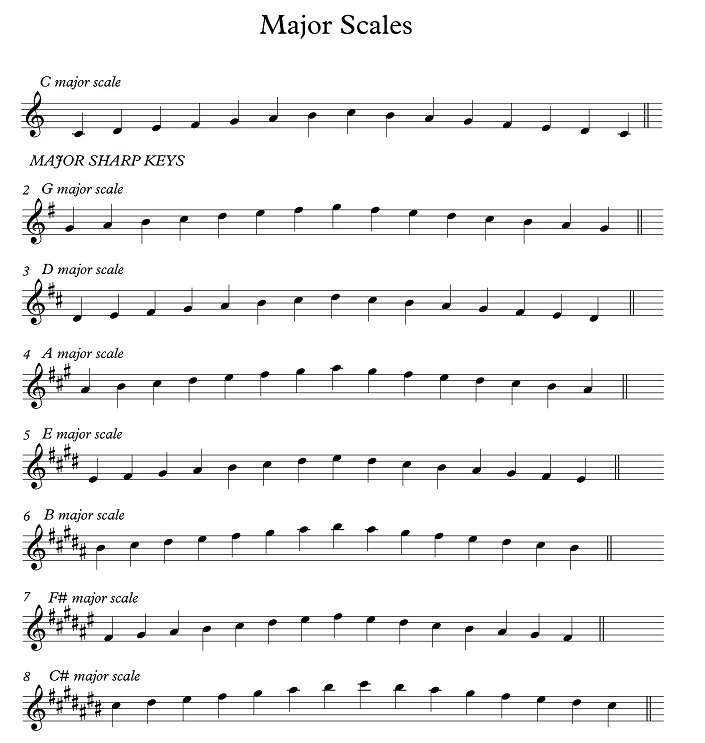 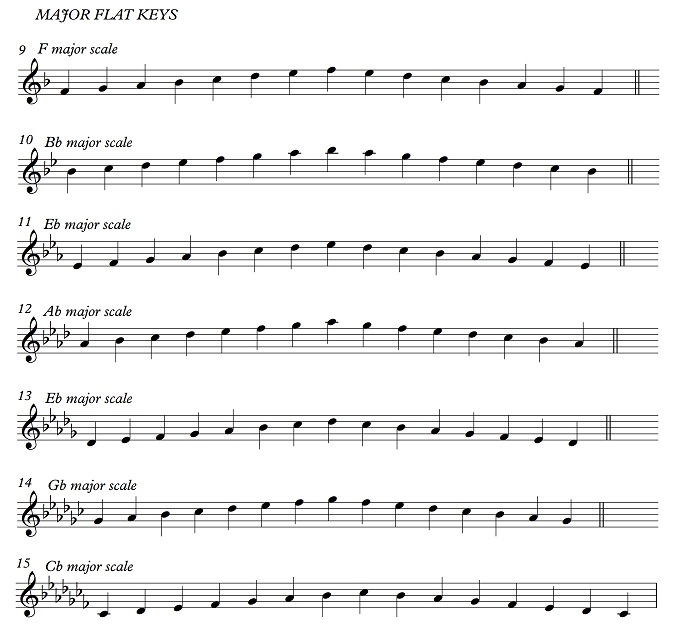 Minor scales are of 3 kinds: Natural, Harmonic and Melodic. Each of these minor scales have an unique sound. 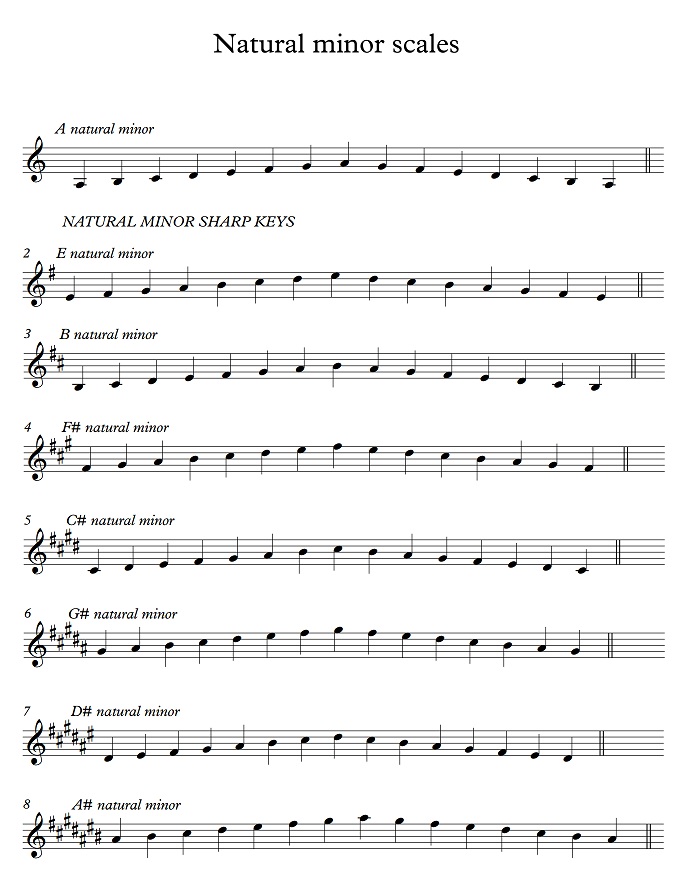 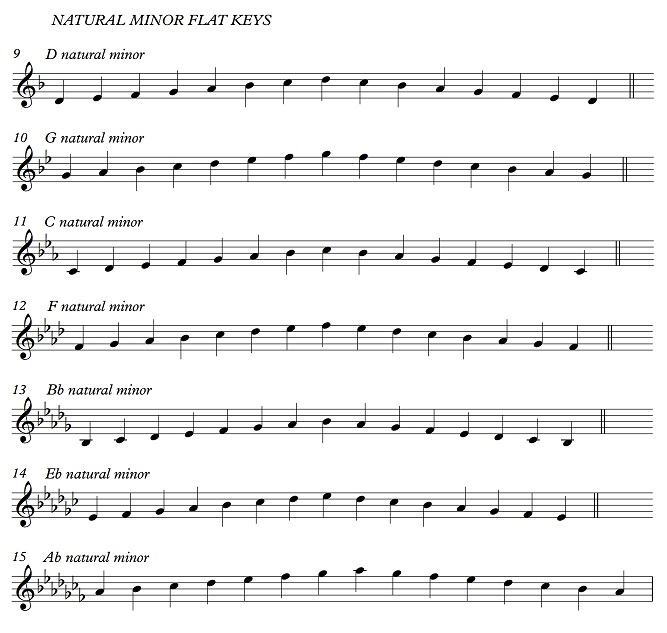 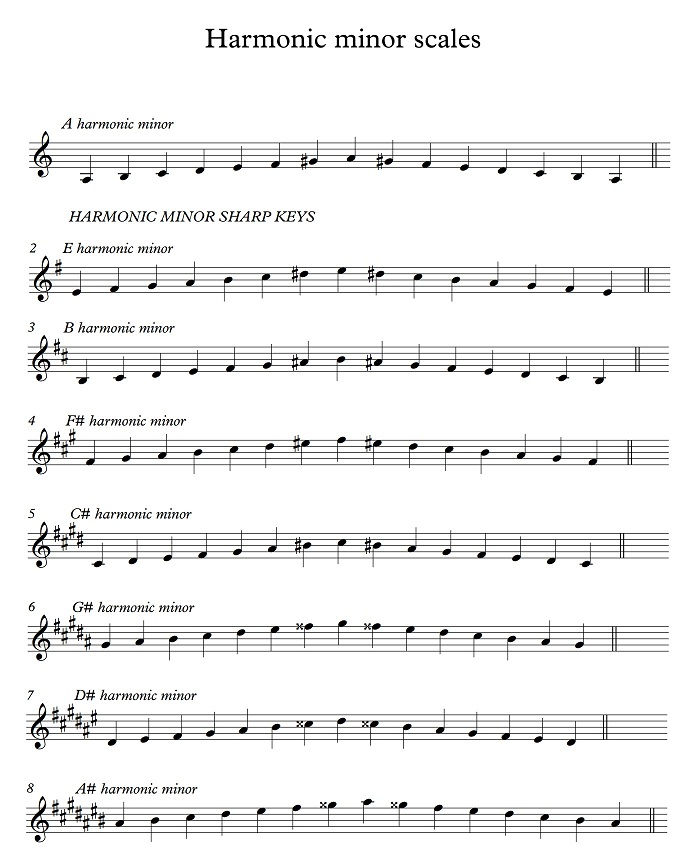 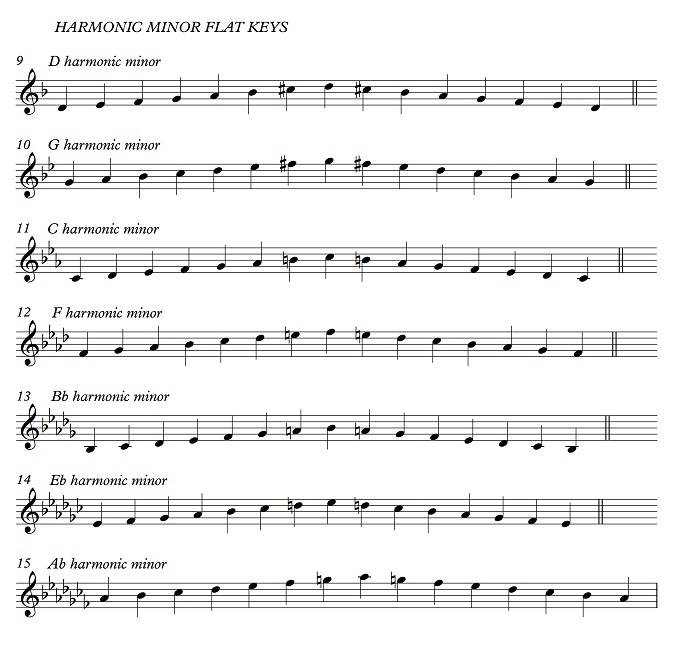 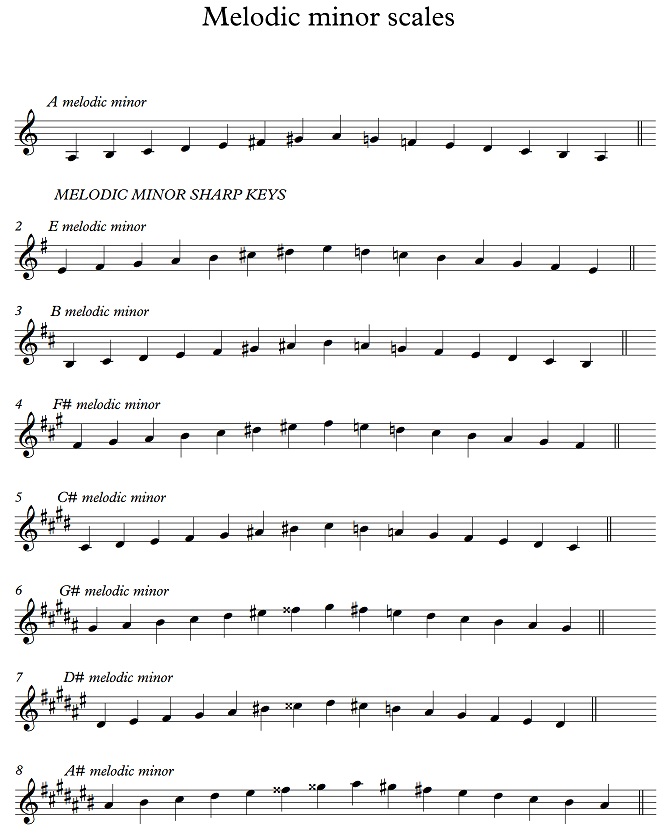 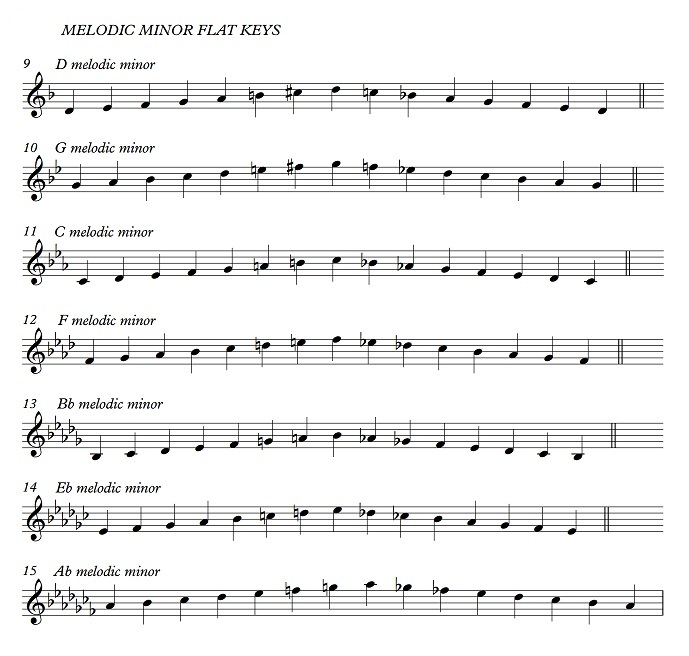 Diminished scales and other scales 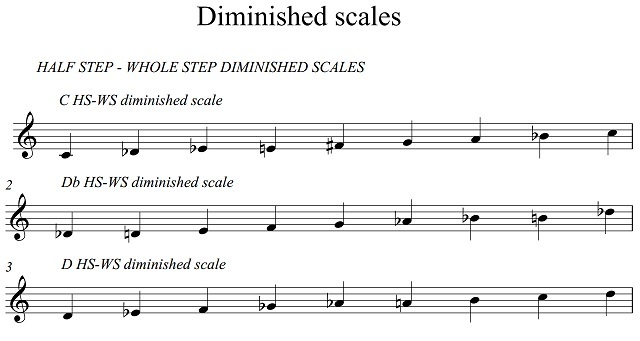 We apply the same logic to the WS-HS diminished scale.

Other scales worth mentioning are the chromatic scale and the whole tone scale.

The chromatic scale consists of 12 notes, each of them at a whole step (semitone) apart.

Although used in western and traditional music, these modes are often used in jazz, especially the C melodic minor scale modes.

In the theory of western music, mode (from Latin modus, "measure, standard, manner, way, size, limit of quantity, method") generally refers to a type of scale, coupled with a set of characteristic melodic behaviours. Although the use of the modes is very common in recent years, dates back to the Middle Ages, itself inspired by the theory of ancient Greek music.
Derived from the C major scale, each of these 7 modes has its unique characteristics due to the pattern of whole steps and half steps. 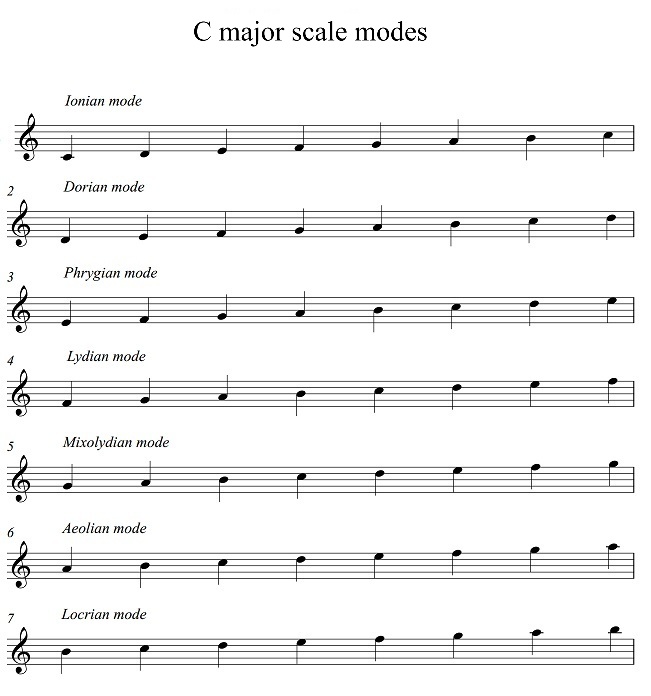 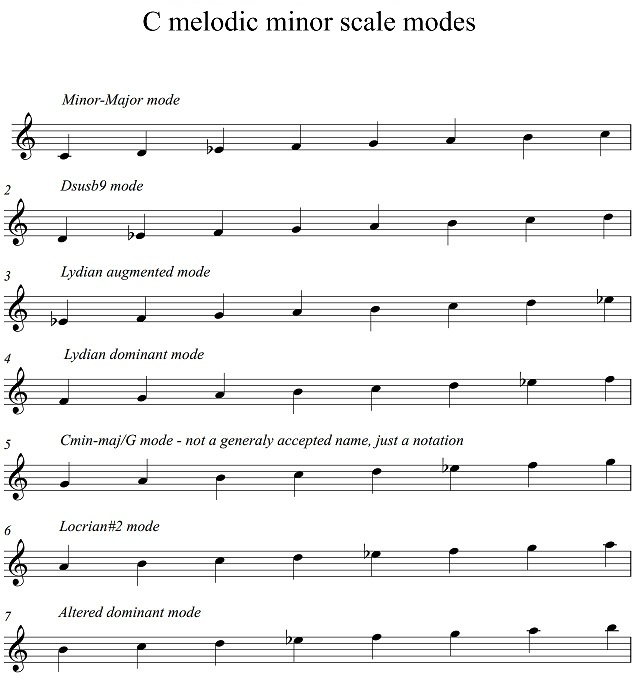 NOTE: all chords found in this section should be interpreted in the treble clef (also called the G clef) 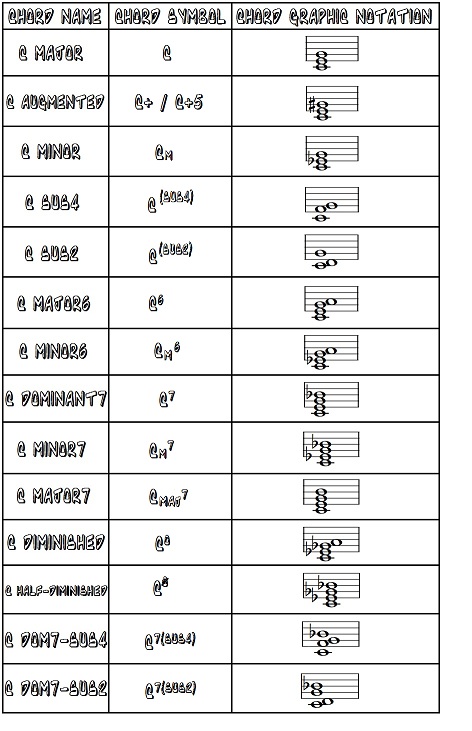 Bellow we will go through the basics of music notation.

Music is a language, and in order to be able to read a new language and also write it, we first need to know its specific alphabet. Instead of words we have to learn 7 letters: A B C D E F G, they look familiar don't they? Of course, they're the first 7 letters of the most common alphabet.

You might ask: well, how come there are so many notes on the piano and only 7 note names? Well that's very simple. If you look closely to a piano keyboard you will start to see a pattern unfolding. The most obvious sign is the 2 and 3 black keys alternation.

The next step is to know which key is A, so we know where to start our 7 note sequence from.

The next question most people ask is: how come the black notes don't also have letters assigned to them? Well, it has something to do with the use of alterations, stuff that we will go through later, so don't panic. All you need to know for now are these 7 notes.

is the graphic system in which notes thrive, without the stave, these bubbles that we call notes wouldn't be assigned any pitch. It consists of 5 lines and 4 in-between spaces that are visible. Actually, the stave has many more ”invisible” lines and spaces that can be used to notate higher or lower notes. We will go through this thoroughly a bit later. For now, here's how the standard representation of the stave actually looks:

The treble clef: it is also named the G clef because it tells us where the G note is found on the stave: on the the second line (counting from bottom to top), from which we can figure out the rest of the notes according to the A B C D E F G loop sequence. Bellow you can see the graphic representation of the treble clef:

The bass clef: also named the F clef because it tells us where we can find the F note on the stave: on the 4th line (counting from bottom to top), from which we can figure out the rest of the A B C D E F G loop sequence. Bellow you can see the graphic representation of the bass clef: 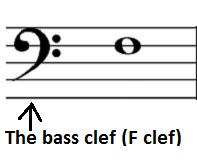 Now, a very inspired question would be: Well, how can we tell where on the stave can we notate a specific note (or sound) from the piano keyboard? This is where the middle C comes in and makes all of this much easier for us. 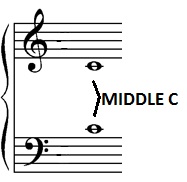 Oh but wait! What is this double stave I see? This adhesion of the upper stave and lower stave is called a grand staff.

Apply the same logic when the note you are trying to read is below the reference note.

3.The time value of notes

So we learned about the pitch of the notes, now we have to know about the duration of notes and how to read them as well. Bellow you can see how these duration symbols came to be.

...and the subdivisions can go on.

A very important aspect of the time flow is the time signature. The time signature basically tells us how many beats are to be contained in each bar/measure and which note value is to be given one beat.

A bar or measure is a segment of time corresponding to a specific number of beats in which each beat is represented by a particular note value and the boundaries of the bar are indicated by vertical bar lines. Bellow you can see both the most common time signature (4/4) and its boundaries (measure/bar).

Remember when I said that the stave has many more invisible lines and spaces in-between those lines? Well, these lines are called ledger lines and are necessary because the standard stave (5 lines, 4 spaces) isn't enough to notate so many notes (the piano has 88 keys). Even so, these ledger lines can't cover all the notes of the piano so there are several artifices that one can use to notate the lowest and highest notes of the piano, I will get into detail in a more advanced chapter. For now, here's how these ledger lines look like:

To be continued in the Advanced theory chapter.

Bellow we will cover advanced aspects of music notation and theory

What are alterations you ask? Well, basically they are symbols that alter the pitch of notes. Remember that we assigned letters only to the white keys in The Basics chapter? Here is where alterations come in handy.

Alterations can be of 2 types: key signatures and accidentals.

A key signature is basically a set of sharp or flat symbols placed together on the staff. Key signatures are generally written immediately after the clef at the beginning of a line of musical notation, although they can appear in other parts of a score, notably after a double barline.

within a measure, unless cancelled by an additional accidental.

Dotted notes come as something extra for the Time Value of Notes chapter that we went through in The Basics section. What the dot does is to extend the duration of the basic note by half of its original value. A dotted note is equivalent to writing the basic note tied to a note of half the value; or with more than one dots, tied to notes of progressively halved value as in the bellow example:

An interval is the distance between two notes. The main intervals are of 3 types: minor (m), major (M), perfect (P), altered (A) and diminished (d). Bellow you can see these 5 types of intervals up to an octave (an octave is the distance from a note up or down to the next note with the same name) built on top of the C note.

A chord is any harmonic set of three notes that is heard as if sounding simultaneously. These need not actually be played together: arpeggios, and broken chords may, for many practical and theoretical purposes, constitute chords.

For more examples of chords, check out the CHORDS section. 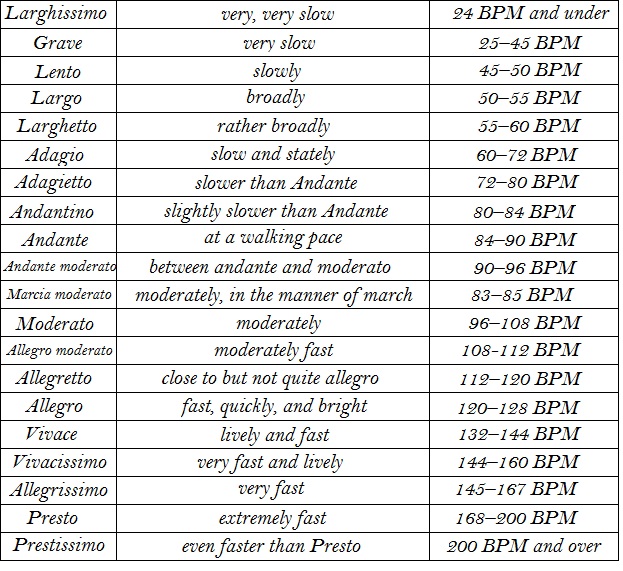 Terms for tempo change: ritardando or rallentando (gradually slowing down) and Accelerando or stringendo (gradually accelerating)

Beyond f and p there are also:

Some pieces contain dynamic designations with more than three f's or p's.

Accents, dynamics, pedaling and other musical artifices, all have the role of articulating the music, therefore giving expressivity to the music being played. Bellow you will find a list of accents used by pianists.